Conan Mac is coming to the Zigfrid Von Underbelly with a full band performance on the 10th of JULY!

Another night like no other, at The Zigfrid von Underbelly Of Hoxton!
Packed with talent from several genre’s of music, to create a bloody marvellous time.

Hosted by the exuberance that is ‘Bill Dury’, he promises hats, laughter and energies that will tickle the soul..

There will be Five Acts, plus a magician (Because why not?) each of their own genre and discovered from all around London Town.

Dutch Mustard - Launch night for riff rocking alt grunge band from London. After a year of blood sweat and tears, the Grunge/Rock four piece are fuelled with energy and ready to show you what they’re about. For lovers of chugging guitars and solid rhythm. 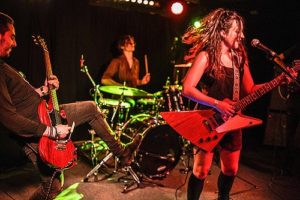 Bill Dury and The Collaborators - Son of Ian Dury; Bill is a troubadour and bleeds soul and music to the people.

Evan Pryer - Rhythm and Blues guitarist,singer and songwriter playing a fusion of Blues,soul and funk and is writing an EP.

A night like no other at Zigfrid von Underbelly of Hoxton! Packed with talent from several genres of music to create a flavourful evening.

Hosted by the exuberance that is Bill Dury. He promises hats, laughter and energies that will tickle the soul.

There will be amazing acts, each of their own genre and discovered from all around London Town.

Bill Dury and The Collaborators - Troubadour. This band has constantly changing members, using multiple genres of music. The musicians play what they feel. Truth

Mount Forel - The soundtrack to your lucid dreams with psychedelic vibes.

Goodfoot are a London-based duo. Huw Foster & Danny Sharples form the creative partnership behind Goodfoot, a funk & soul act on a mission to create intelligent pop, heavy grooves and good vibes. Drawing influence from the likes of Daft Punk, Chic, Erykah Badu and Prince, Goodfoot released their debut EP New Shoes in 2017, with new music due to drop in summer 2018.

LILO - taking her cues from a variety of influences including hip-hop, neo-soul, and electronic pop (to name a few) LILO has been blurring the lines between genres and creating a style that’s all her own. A human melting pot of sounds both old and new, LILO is already drawing comparisons to the likes of Janelle Monae, Kimbra and Nao.

Kayte - washed in melodic, soulful RnB, Kayte shines an intimate light on the reality of life recovering from mental illness with warmth, humour and insight, creating tunes that reflect the hidden parts of an increasingly complicated life.

Podramu - Podramu has only just recently started out as a solo singer-songwriter after a decade of singing covers for rich people, but, alongside his trusty band of friend-sicians, he hopes to conquer the world and ultimately face Donald Trump in a fight to the death. His influences include Rufus Wainwright, The Divine Comedy and Stevie Wonder. He is currently recording his first live studio album and believes it will be ‘lit’, though doesn’t fully understand what this word means.

Johnny Mensah
“Johnny Mensah was born and bred in London, and heavily surrounded by music from a young age. From his early teens, he was influenced by the emerging UK grime scene, frequenting on several South London pirate radio stations and featuring on several collaborations. Delivering a varied style, his lyrical content ranges from catchy melodies and poetic verses, with undertones of Hip Hop, Trap and Soul”

Kinnoha
KINNOHA is a Scottish-born, South London based artist. Having garnered over 250,000 organic online streams, she is steadily making her mark on London’s music scene. KINNOHA has a penchant for mixing dark RnB sounds with lush modern textures, blending in her signature nonchalant vocal style. KINNOHA’s songs use slick wordplay to entice the listener and paint vivid pictures.

KINNOHA featured on Stuart King’s album ‘Late Night Obsessions’, which shot to no.2 in the iTunes electronic music chart in July 2017. With further support from Hoxton Radio and BBC Introducing, she is generating serious momentum.

Morgan Munroe
Originating from Leicester City, solo artist Morgan Munroe takes a soulful, urban approach to her music, with influences from Mariah Carey, Frank Ocean, and Erykah Badu.
Now London based, this unique singer has a wide number of performances under her belt, having taken the stage at many places across the UK.

Rafael and Ron are having a party with loads of feel good House music from 7pm and you are our special guest!

Balmy summer nights are best spent at Ziggy with our lush terrace overlooking Hoxton Square. Come inside for a shake and bubbly. We got home made pizza too.

A special one-off tribute to the grunge scene hosted by die-hard grunge fan Karl Widgerane (aka a Mere Grain of Sand). Various talents will be playing both original music and covers of classics from that era. Includes 4 main acts and some crossover collaborations in between.

A MERE GRAIN OF SAND - the host of the night playing original songs deeply influenced by the dark and emotional side of grunge. Will also be playing covers with other performers later in the night.

GLENN & MIKE - a pair of Harrow-based performers playing original songs showing the lighter side of grunge and alt rock. Will also throw some covers in between. They are not regularly active with their music nowadays but will be stepping to the stage just for this occasion to refresh the amazing skills they have grown up possessing.

LORENCE JORDI - a young talent travelling over from Hungary though he’s previously lived in London. A voice that’s very characteristic of Chris Cornell influences and you can expect some red-hot covers from this guy. It’s a real privilege to have had him agree to play here as the London scene has missed him sincerely.

PAUL HOOKER - Another great Harrow musician who is the frontman of Razor Fly doing all-original songs. He is highly known in his neck of the woods for his dark, droning Drop D riffs that keep grunge alive and breathing.

After a year from releasing her debut EP ” Just Being 15 “, Lydia Singer is BACK with her 2nd EP titled ” Rebellious Teen “.
This promises to be a fantastic afternoon with music from Lydia’s special guests

Don’t miss out, definitely the place to be for your Sunday afternoon.

Brought to you by MusiqueLDN

Under 18s must be accompanied by an adult

Five Fathoms Deep - A 9 piece London based folk band bringing an innovative, dramatic fusion of etherial female vocals, heartwrenchingly evocative strings and upbeat ceildh-esque stompers that will raise your roof as well as your boots!

Ivy Sutherland - Indie-folk singer-songwriter based in North London. Performing as a duo with Dan Latham on drums and Euan Ritchie on mandola/guitar their unique sound will get you floating away and foot-stomping all in one go.

Archie XN TricK - A storyteller with elements of humour, intensity and simplicity.

The return of the space cowboys of feel good house beats; Dan Harwood and his merry mates make the party this Summer Saturday night! Expect the usual big night out with those with a liking of quality beats, decor and feeling good.

Book a table for that party: [email protected]