Nightfires - Riff chugging Led Zeppelin influence, mixed with the modern dirty guitars of Foo Fighters and vocal licks inspired by the likes of Fall Out Boy.

The Fremen - We describe ourselves as #urbanrock or #blackrock”, says Ciaran O’Fathaigh, singer and guitarist of The Fremen. “Our influences in terms of genre include grunge, grime, metal, hiphop, rock, rap, DnB and trap.”

Rocket Fuel presents the Galaxies Collide UK tour April 2018. The tour brings the UK’s most exciting emerging talent to a town near you. In each city there will be a different local headliner giving the acts a great opportunity to perform in front of new crowds on the tour.

Beth Keeping
Singer-songwriter/Pop
Beth Keeping is known for her honest lyrics and captivating pure voice. She combines her love of storytelling and pop melodies to create songs that speak into and about real situations. Fresh back from another trip to Nashville, she is preparing to release her debut EP after a period spent writing for others.

Beth grew up in Surrey listening to singer-songwriters like Delta Goodrem, John Mayer and Martyn Joseph. She started singing and writing songs as a teenager, performing for the first time at Durham University open mic nights. After graduation Beth moved to London and began busking, gigging and writing with artists and songwriters across the UK. Her first single No Hard Feelings came out of the time she spent recovering from an injury, which inspired her to write more authentically about life and identity. In September 2016 the song won a PRS for Music GIGS Songwriting Prize.

In the last 2 years her search for new lyrical stories and influences has taken her on writing trips to Ireland, Estonia, Andalusia and America. Her debut EP is due early 2018.

Molyneaux - As featured on BBC Introducing, Molyneaux brings you atmospheric pop with a twist.

Drive Like Her - A catchy blend of synth-pop, funk and dance. Syncopated guitar riffs and chords weave their way through songs and sounds that have no place being where they are.

Kerry Goodhind - With rich undertones but an underlying powerful resonance, Kerry’s vocal and song writing ability attack a listener’s emotions, finding a connection that leaves a mesmerising mark. It comes as no surprise then that Kerry’s music has been influenced by artists such as Dusty Springfield, Stevie Nicks, Etta James, Barbara Streisand, Enya, Florence and the Machine and London Grammar to name a few.

Ace Rosewall - Originally from Denmark, London based singer/songwriter Ace Rosewall is making waves in London with his raw but at times soft voice and unique songwriting, which consists of elements from both rock, pop and hiphop.

Neuron, a brand new event launched by Captum Records captures the essence of tech house, bringing only the very best up and coming DJs.

“Neuron will make you addicted to the dance floor.”

Come for all the treats Easter has to offer with good house music that is deep with some tech.

We are going on until 4am with a special late license edition with DJs Laze Breaks and Styles Petersan on the decks.

The Ovines - The Ovines are a 4 piece Indie Ska Punk band from Kent, fusing the likes of Red Hot Chilli Peppers, The Doors, The Arctic Monkeys and more together to create a little bit of musical magic. With sets that are sure to keep you on your feet grooving all night, they’re surely not to be missed.

Thom Worth - Tom Robinson BBC6 Music: “I first encountered Thom’s music by happenstance wandering across a festival field. His assured delivery, easy way with language and sheer focused writing chops immediately got my attention. Mark my words, Mr Worth is definitely One To Watch!”

Gold Baby - Gold Baby is an East London based female-fronted four piece. Their music sits somewhere between Indie-Rock and Slacker Pop and they recently put out two tracks, ‘Duppy’ and ‘Feed It!’ for the world to hear. You can hear them on spotify, apple music, soundcloud, bandcamp and all of the other places.

Oliver Beardmore - Inspired by the likes of Oasis, Arctic Monkeys, John Lennon, The Strokes and The Smiths, Oliver aims to progress as far as possible into the music industry with his heartfelt and resonate pieces. His first single ‘Lullabies’ was released in May 2017, and his second single ‘Sirens’ in October of the same year. Has received praise for his “proper songs” from Dave Rowntree of Blur.

Brixton born Jumpin Jack Frost hit the DJ circuit at 18, mixing Funk, Hip Hop and original breakbeats and diving into the Acid House circuit via the Carwash nights in the late 80s with the likes of Grooverider, Bryan Gee, Fabio, Frost and Pete Stewart. When the rave scene exploded Frost was at the forefront, enjoying the freedom of going with the flow and mixing drastically different styles of music to suit the mood of the moment. Residing in The Fridge in Brixton alongside Ellis Dee, Paul Trouble Anderson and Evil Eddie Richards. Frost went on to headline many legendary events of the era including Sunrise and Energy.

Olivia Wilson took up DJing back in 2006, when she used sneak into nightclubs underage and wonder why there weren’t enough female DJs. Olivia the took Up DJing under the alias ‘Little Miss DJ’. In 2012 Olivia then played and produced under the alias ‘Hazel Söze’ named after her favourite character for ‘The Usual Suspect’, due to her passion for film.

Following her releases on Playaz, Söze focused on her DJing and her live PA sets where she has headlined Glastonbury’s Silver Hayes with MC Skibadee, Warmed up for Hospital Records, Fatboy Slim and DJ Hype. Hazel as also played at Boomtown and Secret Garden Party. Hazel’s nightclub experience includes Fabric, Fire, Lightbox, Shoreditch House, Egg, Studio 338 and many more.

Following the success of the launch in April 2017 “I Emerge” returns with another night ​of amazing up and coming talent, with our guest headliner gracing the stage this month: VALENTINA.

An opportunity to perform and network, hosted by Emergo Inc. providing a platform to share talents live on stage from ​acting, singing, comedy or spoken or word maybe something with a twist? This is an opportunity to EMERGE in ​your own light! 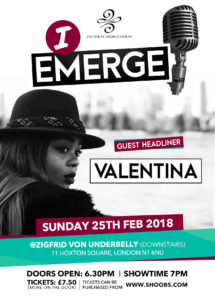 Hoxton Square has got the jamz happening!

Bring your own instruments. Backline supplied - drummers to bring breakables.

All kind of jams welcome - just bring the tunes!