Katy Hurt & Friends meets The Round Up Xmas Special

For one very festive night only…

Katy Hurt & Friends On the Road meets The Round Up hosted by Two Ways Home to bring you a Christmas extravaganza!

Including - Songwriters’ round featuring:

Along with full-band performances from Katy Hurt and Two Ways Home!


Eastern Heights with Jeremy Newall (4 to the Floor Records)

Disco house legend Jeremy Newall (4 To The Floor Records) lands in Hoxton Square for uplifting evening of great music. Known to be a Producer, DJ, former record shop manager and music connoisseur… the list goes on and on! From Bar Rumba’s Garage City via Release the Groove records to Salsoul, Jeremy has an accolade in music so extensive that to list here it can turn this invite into a Shakespeare piece.

Having remixed, colaborated, produced and compiled records for BBE, Strut, West End, Defected, Salsoul, R2, Ron Trent’s Presciption, among several ’til his new baby: 4 To The Floor Records. His set will be indeed full of surprises.

Our resident Alex Eugenio simmers the evening with a soulful soundtrack to warm us up for THE special guest.

Zigfrid has its patio open all evening and cocktail happy hour goes all night so… no excuses.

A night not to be missed!

House beats for a tilted generation.

Party grooves of feel good house all night with the lady known as Daxx Reacher. Expect tropical vibes to feed that Friday feeling!

9pm-3am Free
Email us to book a table

★ WHAT?
The last FUNK FEST night of the year at Zigfrid filled with House, Funk, Nu Disco and Tech. Come join the party! 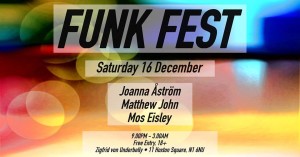 “Heart-on-sleeve, alt-folk, americana with a Dublin accent” or HOSAFAWADA for short. Dublin-born troubador and his alt-country supergroup “the Necessary Evils”, collectively known as “ROB CORCORAN & THE NECESSARY EVILS” will be playing and celebrating their brand new-album ‘INVERSE ALCHEMY’ especially for YOU (and the other people there).

The support act for the night is our great friend, the brilliant and hilarious SIMON STANLEY-WARD!

Ivo Dimchev is BACK at Underbelly with many new songs and…. a band:)
On the piano Dimitar Gorchakov, Double bass: Vasil Hajigrudev

Having been released on big labels, as well as supported in festivals and clubs this line up will be bringing some incredible Tech House, Vocal House and Bass House DJ performances!

All the dark tones with guitars of love, loss, cold hearts and then some…

Headline from our favourite blues raconteur John J. Presley with his last show of the year! Expect downright dirty riffs.

Rahul Advani - Influenced by a classic style of songwriting that harks back to the piano-driven music of Billy Joel and Elton John, Rahul blends heartfelt lyrics and catchy hooks with rock, pop and soul sensibilities.

House / Disco and some party tunes spun by new kid on the block George Plant!