DEFINITION are excited to be making our debut at the legendary Zigfrid von Underbelly.

We are expecting this event to reach full capacity so for those not wanting to be left queueing outside we strongly suggest you arrive early,

Expect quality sound to be coming out of the booth throughout the night, this soirée will feature acts who will each bring their signature beats to enrich your audio pleasure.

See you by the speakers!

ANGEL SILVÉRA
Angel Silvera, is a 23 year old artist from south east London with a new alternative soul sound. After having released her first solo EP entitled Free, she has been gigging all over London. She’s worked with Stevie Wonder, Tweet, Damon Albarn, The Gorillaz, Stormzy and many more but now its her time to be in the forefront singing original material, some unreleased that she cant wait to share with you. So sit back relax and let her smooth tone sooth your senses.

HARI PRIYA
Coming from a musical family Hari Priya grew up listening and watching her dad who was in a jazz band play saxophone around the house. This then gave her the encouragement to peruse her own music career. She began taking an interest in writing music after buying her first album at the age of 9, The diary of Alicia Keys. She then learned to play piano, saxophone and the guitar. Age 9 she got her first real taste in music having starred in The west end musical The Lion King As young Nala. Aged 10 she got her first big break at her young age featuring on her fathers album.
Hari Priya has been gigging a lot in and around London, showcasing all her musical talents and getting into the live music scene. She is currently working hard on her first EP having already been in sessions with the likes of Futurecutes, Tristan Longworth, Jonathon Allen, Jack Gourlay, Wayne Hector and more which will be out later this year!

ROBYN PAIGE
Robyn Paige is a 24 year old R&B Singer from Essex. Since releasing her first single “Righteous” in October 2016 along with Music video with premiered via Redbull Music, Robyn then went on to release her latest Single “White Space’. She is currently working on new material that will be released later this year.

BEKAH NAOMI
Bekah Naomi is an exceptional singer-songwriter on a mission to create music that touches the soul. Her debut EP, Live On, is filled beginning to end with raw emotional lyrics intertwined with surprising melodies, which spring from her eclectic influences and a longing to write songs that mean something. Dealing with everything from grief to betrayal and failure, she likes to tackle the hard subjects head on being open with her songs so that they can reach people. Pair all this with a superlative vocal performance and you have Bekah Naomi!

CHA:DY
Cha:dy is a French born artist from the city of love, Paris! She was formerly in a girl band before she moved to London to focus on her solo career. Already on the radar, the neo soul artist will be releasing her first EP this summer!


Born To Be Wild Thursdays with CrossTheDJ

Drop in for a home made burger and a boogie for the Thursday night in Hoxton that feels like a Friday.

Deep House to Disco with Cross The DJ on the Ziggy decks.

If you like your House Deep and your Disco sweet then book that table and head on to the dance floor for some sweet beats until 3am.

Deep House to Disco shiz and sprinklings of vocal stuff go down with DJ Eddie Van Poppel on the Ziggy decks.

Eddie Van Poppel is a House maestro about town with sets with Amor / Hed Kandi / A List and then some.

Move over, Monday clichés, and let the bank holiday take over!

Hang loose on our sofas, on the terrace or around a restaurant table with your belly stuffed with roast beef or nut roast goodness. Those who can bother to make significant movements, can head to the jukebox and take control of the tunage.

Should you have burst your budget over the weekend, not to worry: a pint of tank fresh Budveiser Budvar, delivered to us straight from the Czech Republic, is on us with every roast order.

DJ Kerli when not doing club NME at KoKo she rocks the decks with us here at Ziggy! A House to Techno set fills the Hoxton airwaves while you stomp it out on our dance floor.

Born To Be Wild Thursdays with Cross The DJ

It’s all cocktails, tank beer and mashed up awesomeness with Cross The DJ this Thursday!

Drop in for a home made burger and a boogie for the Thursday night in Hoxton that feels like a Friday. 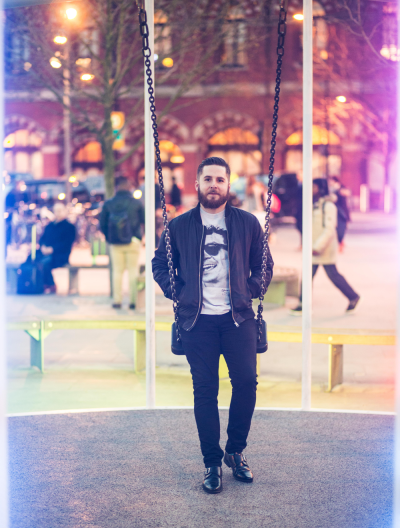